As an intern and a new developer, I didn’t expect to go to the FileMaker Developer Conference so soon. But thanks to Codence, I went to the conference this summer.  It was a big surprise and as I found out later, not the last surprise that was waiting for me during this trip.

This year, the FileMaker Conference took place at the Gaylord Palms Resort near Orlando, Florida, and let me start by saying that it’s an incredibly beautiful place. In fact, it’s almost like a small town with its own stores, restaurants, waterpark… and even crocodiles!

The only weird thing that I’ve noticed during the Day 0 – let’s call it this way – was the absence of logos and any mentions of the brand FileMaker. But overall, there were cool training sessions going on and it looked like a big family reunion. In the evening, we had a great Codence dinner where I’ve finally met most of my coworkers in person.

Day 1: Well, We Are not just FileMaker Developers Anymore 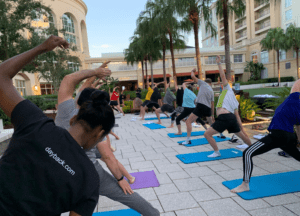 Every day of the conference started with a yoga session under the palms, a healthy breakfast, and a Keynote speech. Among those, the first presentation was the most mind-blowing, to say the least.

During the first Keynote presentation, CEO Brad Freitag announced that the company is expanding, growing…and changing its name. So we walked in as FileMaker Developers and by the time we left, everything around the hotel was changed – Claris’ logo, colors, and the new “Anything is possible” line was featured everywhere.

Day 2: The future of Claris 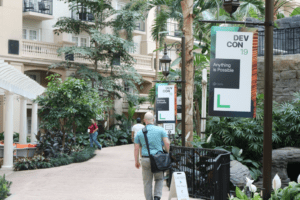 The first day got us all wondering about the future of FileMaker and Claris, so I was very excited to attend the next day’s Keynote Speech. Srini Gurrapu, VP and others were talking about the future of the platform – and it was great to hear about the addition of CoreML, JavaScript embedded in FileMaker, FileMaker Market, FileMaker Cloud, Siri shortcuts, and the new product, Clarice Connect, which is coming to the market early next year. It was a very inspiring speech that meant to me, as a new developer, more opportunities, new, exciting technologies to work with and even more interesting projects ahead.

Between the sessions, I tried to attend as many fun activities as possible. On my first day, I went to the FileMaker Buddy event organized by Women Innovating Together that allowed to team up with an experienced developer and explore the conference together. I’ve almost won in their Scavenger Hunt! This event, along with their luncheon and a chocolate party, allowed me to meet more female developers and it was great to get to know more people in this amazing community. I also didn’t know that they have scholarships for developers who want to go to the conference. Mental note – I should definitely apply next year!

FileMaker Claris staff was amazing. I’m incredibly thankful to Gianine Campbell for always being there to answer questions and inviting me to different events and parties. It was impossible to feel lost there just because everyone was so accommodating!

I wanted to mention all the cool sessions I’ve attended – and I wish I could see them all! I was eager to learn something new so I can experiment a little bit more with the platform. It’s hard to decide what sessions impressed me the most but I will go with the Machine Learning sessions and IoT hands-on labs from Particle. I love finding new ways to interact with FileMaker and all those sessions left me inspired and eager to try something new! Our Codence speakers, Scott Love and Just Pfefferle, also did a great job and I was proud that our company had a big presence during this DevCon

All in all, it was really exciting to see that in this ever-changing world Claris and FileMaker software have a bright and exciting future. What a great time to be a Claris developer. I better go and buy tickets to Nashville and Claris Engage while I still can!

We kill (the pain with) spreadsheets.
Better stated, we help our clients manage information efficiently, innovate with technology, and leverage digital transformation.

Need a simple solution for getting data from a website to FileMaker? JotForm is a nice option. Learn more.

Speak to one of our expert consultants about making sense of your data today. During this free consultation, we’ll address your questions, learn more about your business, and make some immediate recommendations.

Request a Tour Get a Free Consultation