In the course of the Covid-19 pandemic many of our clients and associates have turned to us for financial consulting assistance. One aspect of this has been understanding how to take advantage of the Paycheck Protection Program. We thought it would be helpful to distill what we’ve learned.

We hope this proves useful to you. Stay safe out there (and financially healthy too).

As of this update (early July, 2020), small businesses and sole proprietors can still receive significant federal funds that will not need to be repaid.

Specifically, the U.S. Congress has passed into law, and the President has signed, the third modification to the original Paycheck Protection Program. This latest bill extends the application deadline for PPP loans to August 8th, assuming that funds are still available.

The PPP provides an easy application process for loans, with extremely flexible terms for allowing the funds to be forgiven in part or in full in a relatively short period of time. This law has been a life-saver for some businesses and an unexpected windfall for others.

The PPP is a financial stimulus program available to U.S. companies with fewer than 500 employees, of every size down to one-person businesses. Yes, it is one of the lesser known facts, or at least is poorly understood, that the PPP is available to very small business entities (independent contractors, sole proprietors, and self-employed individuals).

The PPP was originally created out of the CARES Act, which was signed into law on March 27th. The CARES Act (the Coronavirus Aid, Relief, and Economic Security Act) was by far the largest stimulus bill in the history of the United States, totaling over $2 trillion. The official price tag is expected to net to $1.8 trillion (over $2.2 trillion was appropriated, however it includes debt that the government expects will be repaid… but what’s a few hundred billion?*).

64,000 years ago the planet was in the Middle Paleolithic Age, best known as the era when Neanderthals were the dominant hominids. For comparison, writing first emerged around 5,000 years ago. 2,300 years ago the Babylonians first denoted orders of magnitude. The modern Arabic oval zero character, 0, first appeared 1,200 years ago. Modern accounting and double-entry bookkeeping is 500 years old.

Of this sum, $349 billion was allocated for the PPP. All of these funds were applied for and allocated within two weeks to 1.7 million loans!

The first amendment to the program, on April 24th, added another $320 billion of funds for lending. Then on June 5th the Paycheck Protection Program Flexibility Act was passed, which changed some of the rules, especially regarding how the funds could be used as well as relaxing the terms for loan forgiveness. Most recently, on July 4th, the application deadline for a PPP loan was extended until August 8th. The rationale of Congress and the Treasury Department was that around $130 billion in funds were left over when the original deadline came on June 30th, and they recognized that some small businesses did not know that they were eligible for the program. They could have appropriated the funds for something else, but they chose not to do so. 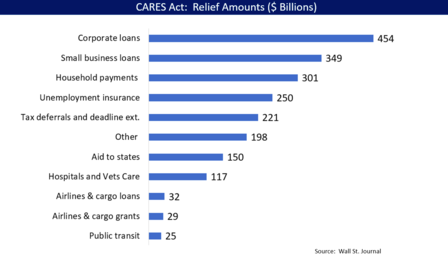 The program is administered by the Small Business Administration, a U.S. federal agency that has existed since 1953. The actual loan processing and distribution is made by banks and credit unions. The great majority of banks in the U.S. offer the program. Some banks have discontinued participating, but you shouldn’t have difficulty finding a participating bank. In case you do, see: https://bit.ly/3edV7O1.

Also, if you are willing to create a new bank account with a bank at which you haven’t had an account before, you may find them more than happy to establish you as a new customer. Community banks and smaller regional banks may provide better customer service and support than large national banks.

The maximum loan amounts for companies are based on the number of employees and the average monthly payroll in 2019 (or a shorter period if you weren’t in business for all of 2019). If you are a one-person business you do need to have been reporting your business income on your tax returns, and if you don’t have a separate business bank account you will need to set one up.

For individuals, if you file a Schedule C, you can use that as a basis for determining your loan amount. Companies will use their W-2’s or 941 reports from 2019. The calculation is essentially to take the average payroll per month (for 2019) multiplied by 2.5. Note, though, that for any given individual, their compensation for the purpose of the calculation is capped at $100,000 per year. For full details, see: https://bit.ly/3efbda6.

The PPP application is straightforward, and most of the questions are easy to answer. The one that may cause you to hesitate is that you are required to certify, in good faith, that “current economic uncertainty makes this loan request necessary to support the ongoing operations of the applicant”.

You can spend hours online reading various lawyers’ and accountants’ interpretations of this question. It comes down to the ambiguity of the words “uncertainty” and “necessary”. We have had some long conversations about this at Codence, examining questions of integrity and our relative need in applying for the program. We discovered that nearly every small business client of ours has applied for and received a PPP loan.

We have lost some business due to clients canceling or pausing projects, though we have been lucky to have other customers who are doing well and are continuing to work with us, so at the moment our business has been more or less steady. However, we certainly are living with much greater risk and “uncertainty”… given the possibility of significant further disruption to the economy, or the possibility of one or more of our key principals or employees becoming sick. Though today the loan isn’t strictly vital for us, it may well be tomorrow. We admit, we had some qualms about it, but we ultimately assessed that the primary intention of Congress was to provide a stimulus to the economy and to be very flexible regarding who could receive the funding. Since then, not only have we received a fairly substantial forgivable loan, but with our encouragement some of the independent contractors associated with Codence have received loans as well.

There has been a good bit of controversy around the program, centered on the fact that some public companies (who nevertheless had fewer than 500 employees), and some highly profitable private companies who were clearly not the target of the program, were publicly humiliated for participating in the program. Some chose to return the funds they received. However, there is no practical concern for true small businesses. The Treasury Department and the Small Business Administration say that businesses borrowing less than $2 million are considered to have made the certification in good faith. They won’t be subject to additional scrutiny.

Just this week, the Treasury Department published the list of participating companies who received loans over $150,000. Notably, however, 86.5% of all loans were for less than $150,000.

Across all 50 states, 72 percent to 96 percent of estimated small business payroll was covered by PPP loans. This seems to be a remarkably high percentage!

That said, this does not appear to be a “wealth redistribution program”. In the words of the SBA: “PPP loans were made across economically diverse areas of the economy. Low and moderate income areas received PPP loans approximately proportionate to their percentage of the population.”

Great euphemism: “Not Low or Moderate Income”… might that be “High Income”?

Of interest to certain readers of our blog, the second largest sector of industries to receive funds was Professional, Scientific, and Technical Services companies, totaling over $66 billion of funding. Here’s the report on the use of funds as of June 30th.

One unfortunate consequence of the legislation as written, and as interpreted by the SBA, is that the businesses that are hardest hit and can’t sustain their employee and payroll levels (or bounce back fairly quickly), will not be able to have the loans forgiven, or at least not in full. The businesses that can maintain their employee and payroll levels will be able to have the loans entirely forgiven.

As of the latest revision, the PPP “loans” are 5-year term loans at 1% interest, with interest deferred until an application for forgiveness has been submitted. The good news for most businesses is that all or most of the loan will automatically be forgiven within a few months unless your number of employees substantially and rapidly shrinks in the period after the receipt of the loan. The primary criteria for forgiveness is that the headcount of FTE employees must be retained during the 8 weeks after receiving the loan. Further, at least 60% of the funds must be used for payroll within either 8 weeks or 24 weeks.

Yes, that sounds confusing at first. The rules regarding the loan terms and the forgiveness terms have been evolving with each round of legislation. Further, the U.S. Dept. of the Treasury and the SBA have also issued periodic “guidance” and “rules” in the form of press releases and updated web pages.

For more details, as well as for the two versions of the forgiveness application form, see:

There are an extraordinary number of articles about the PPP program. A Google search will provide more perspectives and analysis than you can imagine. As often is the case, Wikipedia provides a good overview.

There are other federal assistance programs spawned by the CARES Act and other legislation. The other one that is possibly of most interest to small businesses is the EIDL (Economic Injury Disaster Relief) program. It is even easier to apply for than the PPP and it provides automatic grants to small businesses based on the number of employees, at $1000 per employee up to a maximum of $10,000. This means that a business with 5 employees would be granted $5,000, and a business with 10 employees as well as a business with 499 employees would both be granted $10,000.

Other than that, the EIDL is a relatively traditional 30-year loan at a modest interest rate. The loans are available with “no questions asked” up to $150,000 depending on the size of the business. For loans above $150,000 it is necessary to demonstrate economic injury (loss of income). Again, it appears that the federal government is intent upon providing a broad stimulus to the economy rather than carefully constraining funds to businesses that have been demonstrably impacted by Covid-19.

One of the founders of Codence, Danny's passions for business systems, FileMaker, and the power of financial data has served our clients for decades. Danny dedicates himself to unlocking insight, facilitating decisions, and helping our clients’ businesses thrive. He’s a wine enthusiast, and can give great advice on where to find amazing hot springs throughout Colorado.