Security is obviously a big concern for everyone in the technology world, and we often are asked to secure FileMaker solutions for clients. In one recent project, we were asked how we could secure our client’s data even from us.

As experienced FileMaker developers know, [Full Access] privileges give a user the ability to make all changes to a FileMaker file, including to data. By definition, Full Access is, well, full access.

Our client tracks data that is protected under the HIPAA Privacy Rule. They work with personal and medical information. In this particular situation, the client’s requirement is that an employee (with access) may see any of the data in their application at any time, but the data needs to be secured from anyone outside the company.

In this particular case, they need the team at Codence to be able to make changes, add features, and so on—all without the ability to see any of the private data involved.

We’ve detailed our approach using FileMaker’s CryptEncrypt function and created an example file for you to download. We hope you find it useful and of interest.

When approaching the use case, we considered a few general approaches:

Here we’d build interface and most fields (the non-private ones) in a main file, and secure data in a second file. We’d not allow developers outside the client organization Full Access to that file. This didn’t fully meet our client’s needs: managing a separate data file was beyond their technical comfort, and it still wouldn’t meet the primary use case where even with [Full Access], they needed the data locked down.

We also considered creating a non-Full Access privilege set, and through Custom Menus and FileMaker functions allowing work in the Manage Database dialog, Script Workspace, and so on. While this approach would certainly work—and may well represent a “more elegant” approach—it still didn’t cover the scenario where someone has access to the [Full Access] credentials.

Due to the sensitivity of the data, this is ultimately what we chose — with these functions in place, our clients can fully encrypt their data, even from a [Full Access] account. Without the key to decrypt, the information is secure.

The attached example demonstrates one method of implementing encryption in an app using the CryptEncrypt function. Rather than hard coding which fields to encrypt, it leverages FileMaker Design functions to give users a way to choose fields for themselves and some abstraction to apply encryption. The idea is to provide an easy way for our client to be able to secure data over time should they add new tables or fields. Given the requirements, we found that encrypting the data was only part of the solution, and that managing access to that data for Full Access accounts would require some additional attention.

As we looked at all the ways to secure the data, a first step was to ensure that the file itself has encryption at rest (EAR) in place which helps protect the data in the event that the physical file itself is ever taken. This can be applied using the Developer Utilities. Since it is not possible to create limited Full Access accounts using FileMaker Manage Security (though wouldn’t that be nice?), we decided the best approach was a combination of a workflow and programming in the application. Additionally, encrypting the data meant that the app was not really usable for work purposes; so we proposed the following overall process to help manage developer access:

Keep in mind that in our case, we needed to encrypt data for various fields across all records in multiple tables. The attached example is very flexible and is better served by a clear method to follow in case an error occurs or encryption fields are changed while data is encrypted. Whatever you choose to do, it is important to have a process that ensures all data is secured as needed when the process is complete. Do review any regulations regarding compliance that you are working to meet to be sure that whatever process you put in place meets the necessary standards.

There are many aspects of encrypting to be aware of and it is important to understand them.

Notes on the attached example 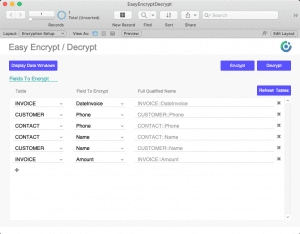 FileMaker’s field-level encryption functions go a long way to helping secure your data. We were reminded along the way that, as with any development process, it was important to invest time learning the details of these functions and to test various approaches. While our example may serve as a good launching point, it is not meant to be foolproof nor a “perfect” way to approach encryption. Rather, it is one idea that we hope will provide some insight as you do your own exploration.

The most secure approach is to combine data access policies and procedures that are supported with programming. We hope this post offers some insight. Explore more security posts, like Managing Security Changes.

Aaron is certified in FileMaker 8-12,16-18. With more than 18 years’ experience building FileMaker solutions, he was a contributing author of the FileMaker Training Series for many years, and wrote the first training module for FileMaker Go. When he’s not dedicating every breath to development, he loves riding his motorcycle and playing guitar.