After finally watching Hamilton, I’ve decided that everything should be set to music and rhyme. Here’s how Hamilton might manage the Federalist papers:

I’ll save you from any more of my rap skills and get to it (and if you’re a fan, shoot me an email, and I’ll send you a rap: FREE).

Somewhat like going to a Broadway show and expecting to see chairs organized into rows, centralized navigation isn’t often an explicit feature request, but every user expects to see it. Central navigation is an overarching menu (or button/tab) system where you can go from anywhere to anywhere within software, regardless of context. Another kind of navigation is specialized – where you link directly to a specific element in your solution.

This post explores a technique for building a data-driven, hierarchical navigation menu that will level up (think Mario one up mushroom… ding!) your apps in ways that are both intuitive for users, and quite slick for us FileMaker nerds.

So what are the goals?

Let me start with the final product so I can deconstruct it with a visual in your mind. Here are screenshots of a navigation card both collapsed and expanded: 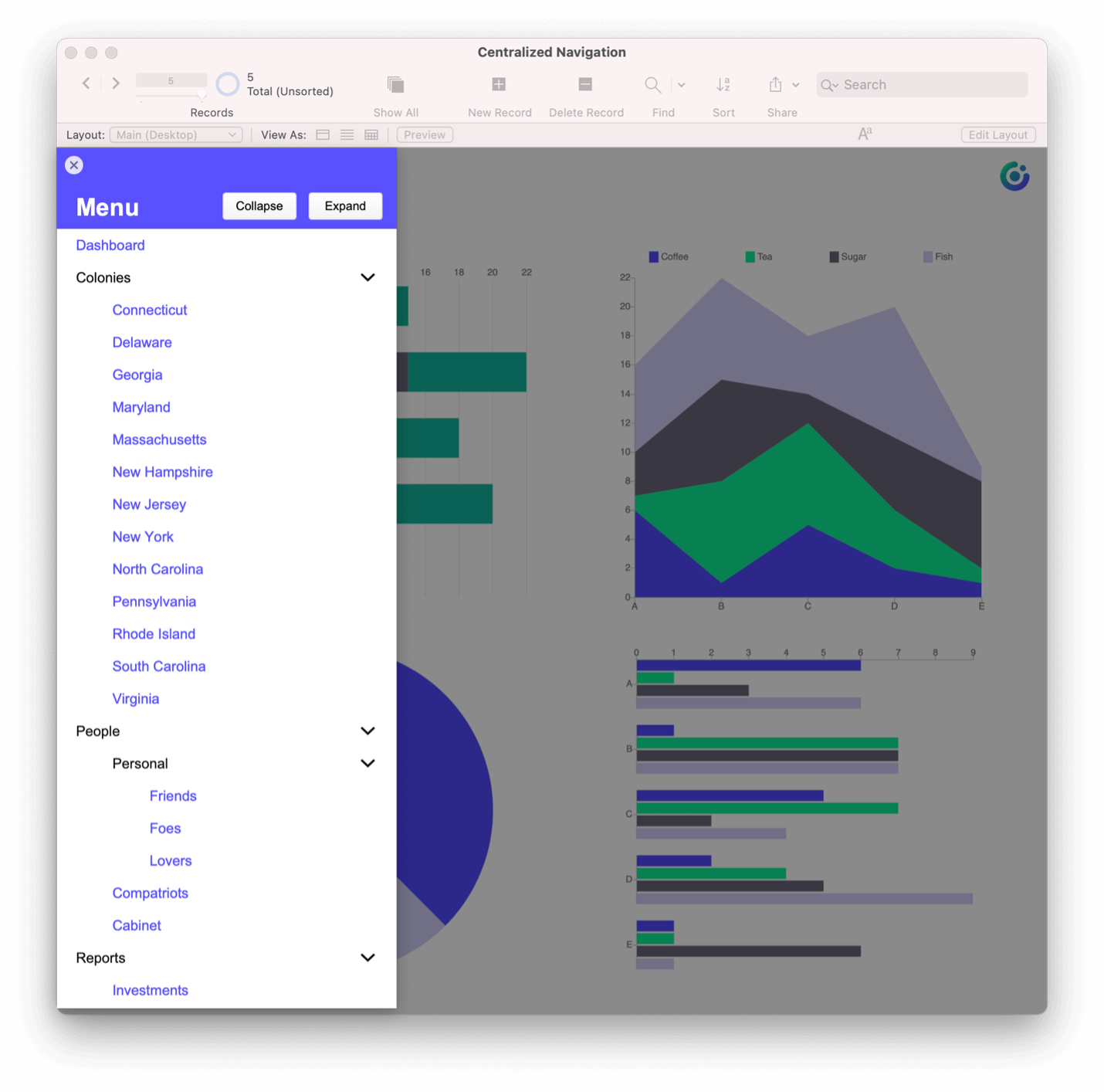 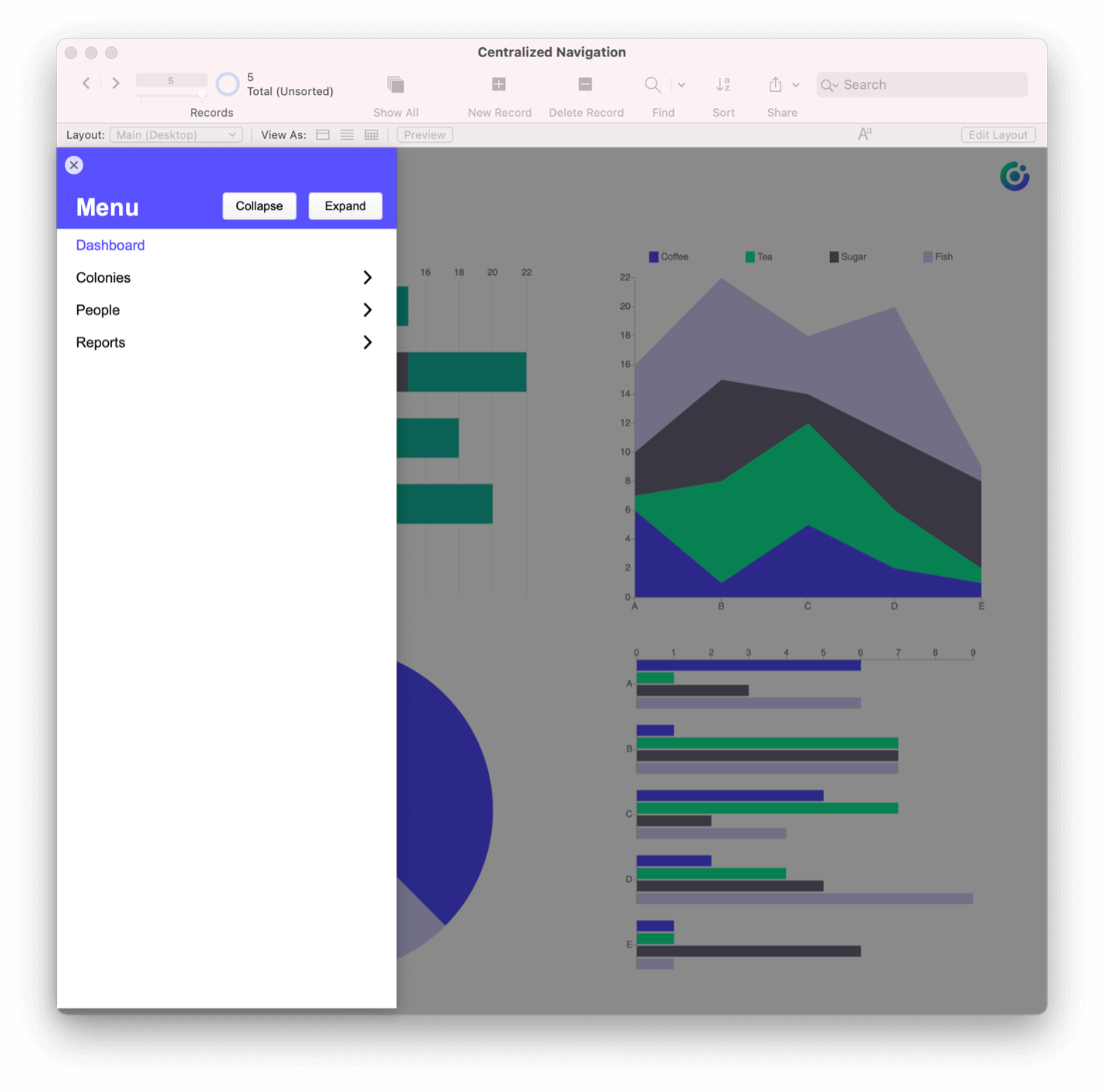 And here’s a quick video showing you the functionality:

One of the key benefits to this technique is that your navigation menu is driven by data – you won’t be adding each menu choice by hand. What you’re looking at is a List view in a card window.

So, what are the parts to make this happen?

Setting Up the Tables

The Navigation table will be the keystone to make this all work. By having a data-driven navigation system (based on records), you’ll have a flexible way to add, remove, and edit options as your system evolves. If you add a new layout, you can add a new record to your Navigation table and you’re done! The tool is flexible as well – you can add reports, processes, and nearly anything that would otherwise be driven by a button.

In the navigation table, we’ve got a few fields that are important to make this work.

The screenshot above shows how the sort field uses dashes to define the hierarchy. If something is at the first level, it will be a three-digit number. For every level above that, you’ll see a dash before the next three-digit number. We’re using this so we can sort alphabetically by that sort field.

The NavVL table is a virtual list, which means the data isn’t stored within the table. Instead, the data comes from another source – in this case a global variable which is set when the main navigation script is run. It mimics much of what the Navigation table has. So why two tables that are so similar? Flexibility.

The Navigation Card layout is sized to show up on the right or left side of the screen (tall and skinny). The context of the layout is the NavVL table – the virtual list. You’ll see the name field on the layout, and that’s based on the display field in the Navigation table, which shows the hierarchy with indents.

Considering the data can be nested (multiple levels of hierarchy), it’s helpful to have arrows to show if a menu is open or not. It’s a visual cue that tells you if there is a submenu and if that submenu is visible. The layout also has a button that will do one of three things: 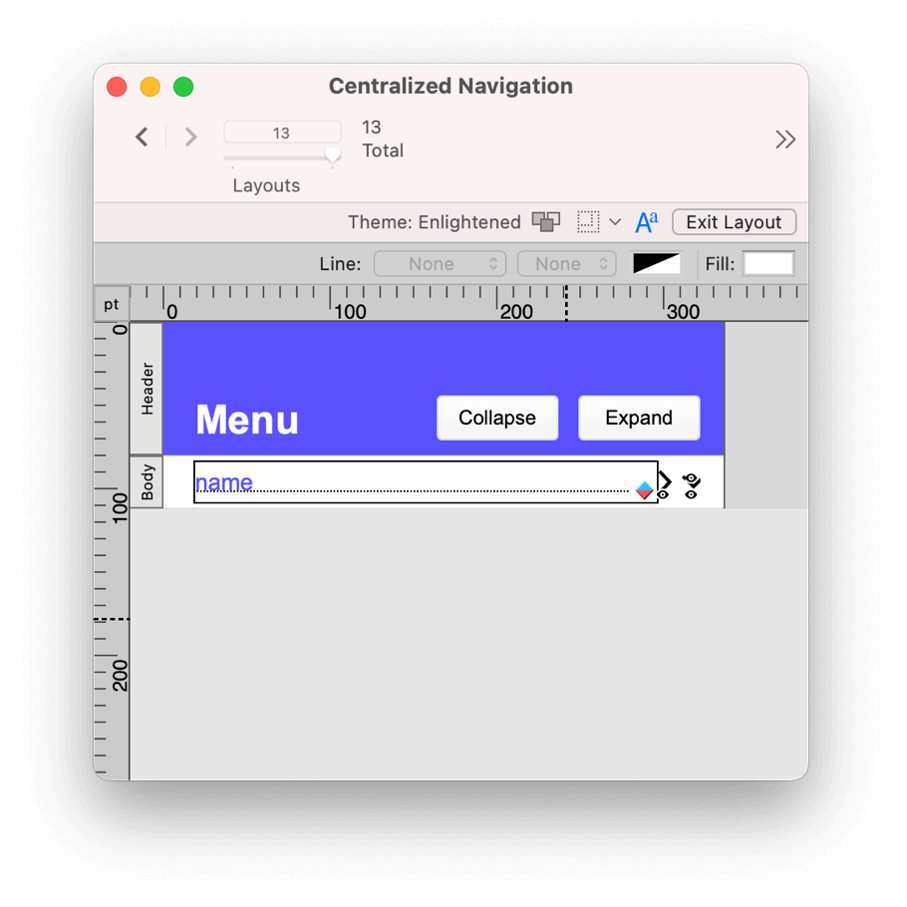 First, you’ll populate the virtual list and open your card window with the correct found set.

In order to efficiently gather a return delimited list of values for the virtual list, I chose to use ExecuteSQL to collect the data. The $$navigation global field is populated based on the SELECT statement — GFN() and GTN() are custom functions included in the demo file and protect this calculation from breaking if the referenced fields or table occurrences are renamed. 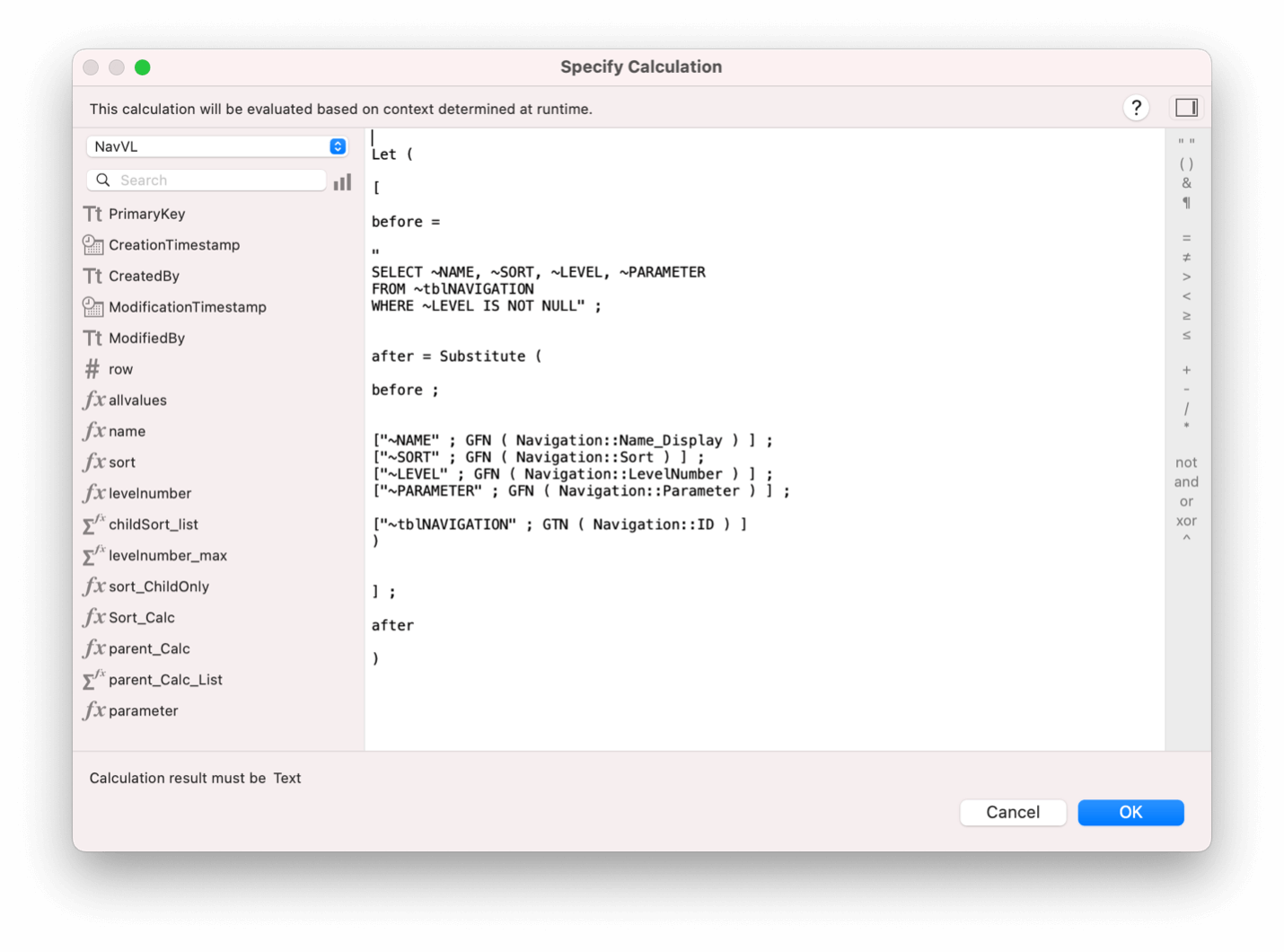 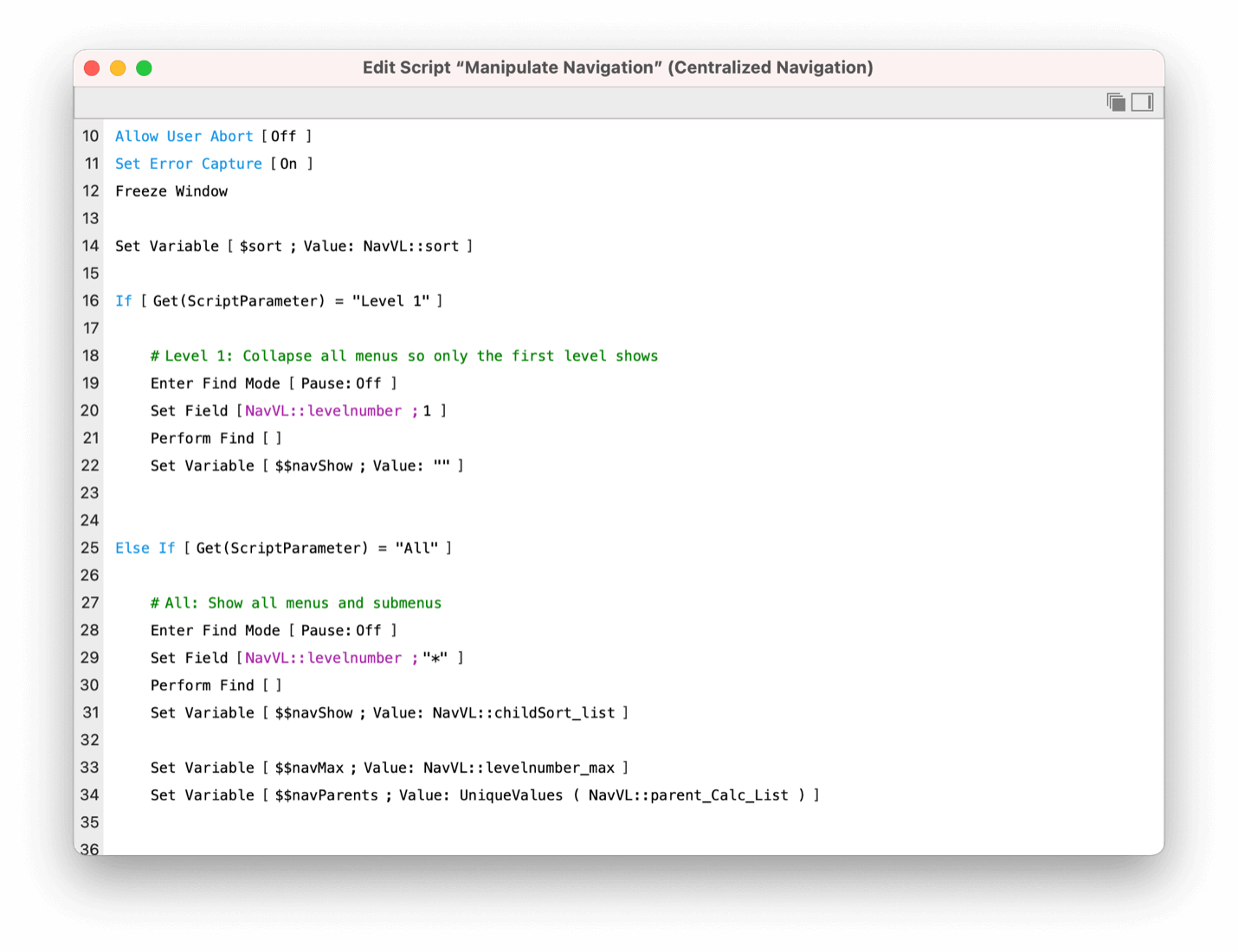 Things are a little messier when deal with the individual menus. In short, we need to explicitly say which menus we want to show (note that level 1 options ALWAYS show).

To expand a single menu, we explicitly call out that sort number and place it in the $$navShow global variable. From there, we perform a find where we look for any virtual list record where the Parent_Calc equals that sort number. 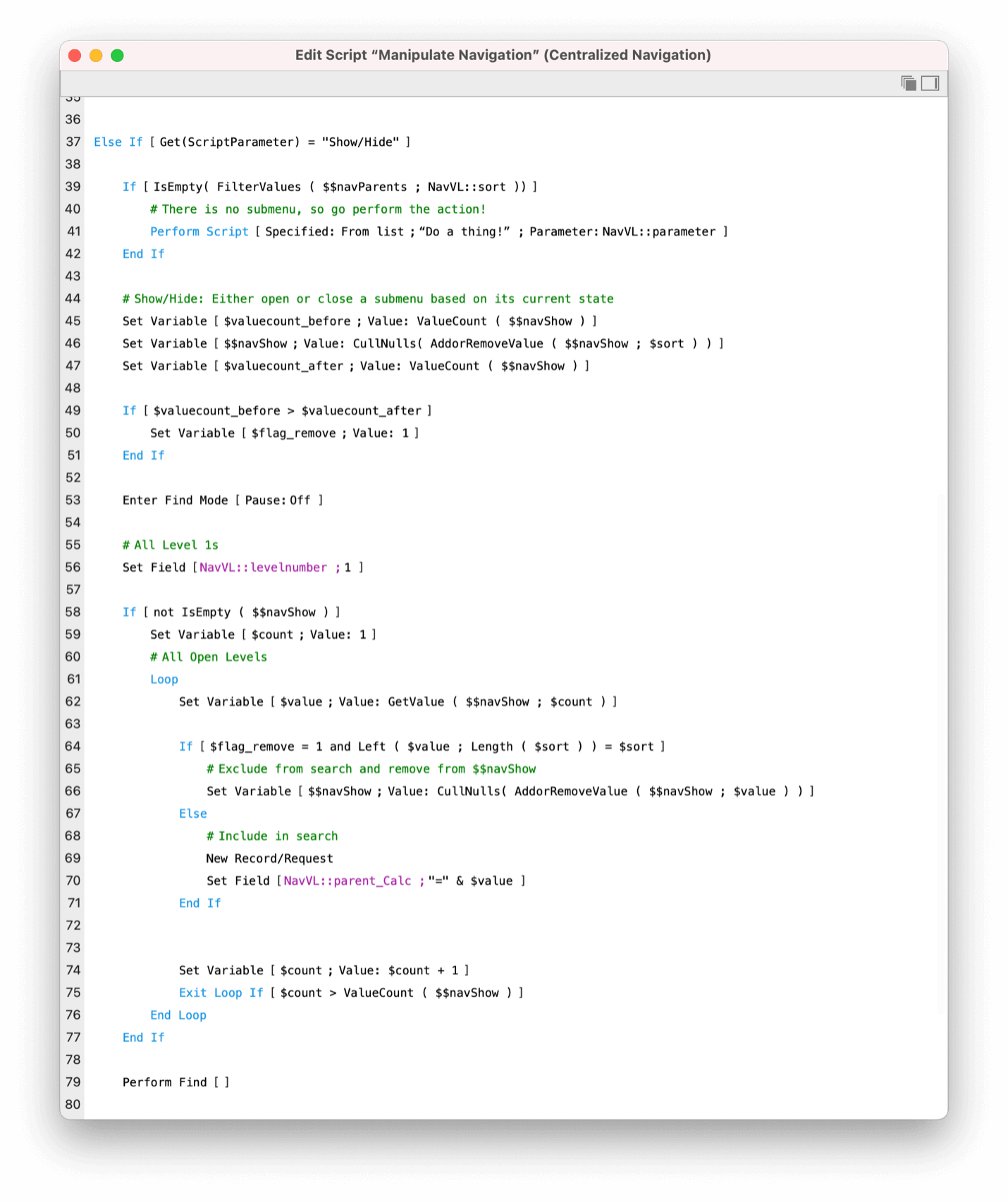 Is this worth the effort?

Totally! In many cases, having flexible navigation can enhance your solution. You can add new navigation options by adding records to a table. You can use if statements to run different subscripts when a user clicks on any given menu item, and your users will intuitively know how to navigate around an interface like this. Since this technique uses a virtual list, you can easily load only the menu options that apply to a given user or the current layout.

A little bit of effort can go a long way! Grab what you can from this demo file and apply it to your own solution. You’ll have a flexible navigation system that will be easy to modify as your solution grows!

Martha has over 15 years of FileMaker development experience. She has a passion for helping others: as a consultant, mentor, and friend. When she isn’t discussing reporting and design, she’s happy to chat about grammar (Oxford comma), indoor spin (#oneupmushroom), and board games (Codenames for a party, Lords of Waterdeep for a smaller group).