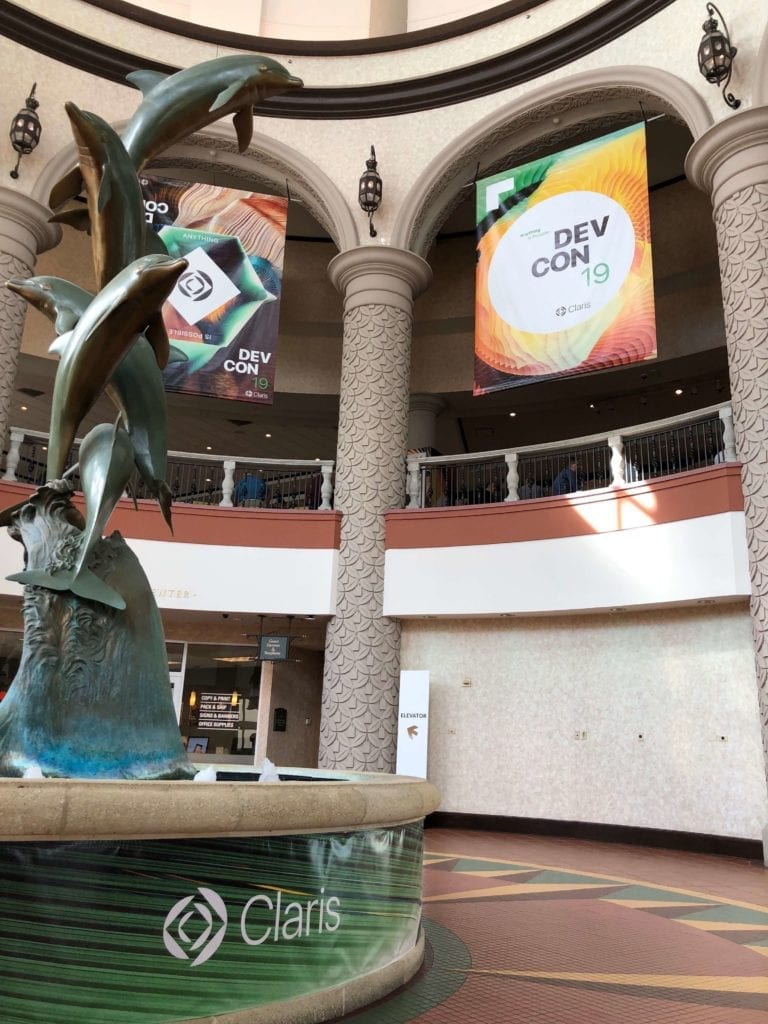 Today’s Product Visionary Keynote on day two of Claris DevCon 19 just blew me away. Without exaggeration, it was the most impactive DevCon I’ve ever attended… and I’ve been to nearly every DevCon for the past 20+ years.

Make no mistake, Claris is not simply a newly rebranded FileMaker, Inc.

Srini Gurrapu, the new VP of Product Management and Design, unveiled the company’s strategy and, together with his product management team, shared what’s to come.

Srini reinforced that Claris is “Cloud-First”, not “Cloud-Only”: FileMaker is alive and well, and the company is increasing its investment into its research and development.

Robert Holsey, Product Manager, demonstrated a stunning example of FileMaker natively deployed to the Web, complete with responsive layouts, new objects, and – incredibly – design and development in the same experience.

We saw JavaScript and coreML demonstrated where Robert took a photo of a sparkplug that was immediately identified by a photo recognition service and then found – using a FileMaker script – within his database. He admitted, it seemed a bit like witchcraft.

On the Mobile side, he demonstrated NFC tags where you can recall data and run scripts by simply bringing your phone within proximity of a tag.

To further reinforce our collective embrace of mobile and interconnected apps, Robert showed off Siri integration as well. Yes, you can now say, “Hey Siri, find all today’s new records” in FileMaker.

…And I thought the year FileMaker showed off the tab control object was cool.

While it wasn’t central to Robert’s demo, the fact that we now have access to JavaScript within FileMaker is a very big deal. It opens up literally thousands of libraries, tools, and services to us as developers.

Our little island just got a bridge to an entire software development universe.

The team showed off the next iteration of FileMaker Cloud – which delivers a web-native interface for launching apps, managing users and more. Claris promised a strong emphasis on both security and performance. The takeaway from the FM Cloud demo being, they’re making it easier than ever to deploy a FileMaker solution. It’s getting really close to simply being a click of a button.

Srini then invited Giuliano Iacobelli, CEO and Founder of Stamplay, and now Director of Product Management and lead for Claris Connect, to show off Claris’ first new product.

Claris Connect takes the promise of an interconnected FileMaker using API calls, JSON, and JavaScript and puts it into the hands of the citizen developer. You don’t need to write a line of code to now connect Salesforce, Hubspot, MailChimp and hundreds of other SaaS-based apps to a FileMaker solution.

Using Claris Connect, you make use of a simple interface for integrating two technologies, both cloud-based and local. This takes my metaphor of a bridge and enables nearly anyone to cross it.

And it’s important to note – this is not just a way to connect FileMaker databases to services: Claris Connect is an entirely separate product and can be used to integrate all sorts of products that may have nothing to do with FileMaker.

Claris has opened an entirely new market for itself.

Here’s where Srini blew me away. He teased a look at what’s next – a world in which we’re not stuck in one single environment (FileMaker, Salesforce, or whatever other platform you’re using), and instead developers will be able to stitch together apps and workflows that cross multiple platforms.

Imagine building a dashboard quickly that, say, shows off revenue numbers using tools from one service (a charting engine perhaps or analytics tool), pulls data from a database (any modern database), and enables a workflow that crosses an email service, a CRM, and a calendar… all in one interconnected mix. Again, the key is, not bound in one environment. It’s a new way of conceiving what an “app” is. We can’t use the singular any more. We’ll be using “apps of apps”.

The team at Claris will do a better job of illustrating the concept than I will, but I think they really understand that software development is no longer a lone enterprise: we’ll be collaborating, leveraging work done by others, and focusing only on what each of us has to uniquely contribute.

As I said yesterday, it’s an exciting time to be a Claris developer.