The opening Kickoff session for Claris Engage Beyond just wrapped, and the team at Claris packed a ton of information into an hour.

Brad Freitag, CEO, framed the conversation by reiterating the company’s three-fold strategy of reintroducing its brand – now appended with “an Apple Company” – moving from on-premise to “cloud smart” deployment and transitioning from a waterfall, major-release cycle to an agile, incremental schedule. Brad coupled these overarching objectives with the team’s focus in the areas of “platform, community, and awareness.”

What came in the hour following reinforced these themes: Claris exhibits a continued investment in the cloud, clearly views FileMaker as an integral piece of a larger, evolving, web-delivered, workflow-centric platform, and communicated a renewed emphasis on its relationships within its partner community.

Of particular note were comments from Brad and Andrew LeCates, Director of Product Marketing and Community, focused on IT compliance and certification. The Claris platform has been continually improving its adoption of open, common technology standards over the past years; today, the team drove home its intent to work even better with broad IT concerns, security policies, and scalability. 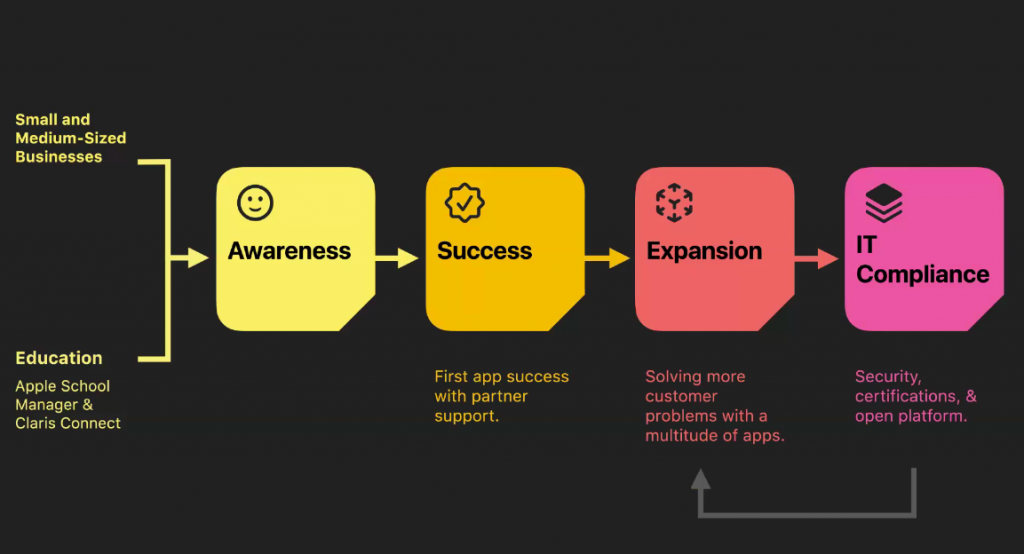 Numerous speakers touched on partners serving as a critical component in the Claris ecosystem.

In addition to providing useful feedback and leadership on the professional end of the low-code spectrum, Claris stressed that partners bolster their efforts with IT organizations and in supporting customers directly. It has recently formalized a program for making introductions to partners to better ensure success for new and emerging customers to the platform. (Codence has been proud to serve as one of the early participants in that program.)

Apps Designed for the Web

The feature, dubbed for now ESS+, coupled with Claris’ recent release supporting Linux, promises WAN performance and scalability that have been mostly out of reach for FileMaker users and opens new possibilities for both inter-connectivity and entirely Claris-backed solutions. Without wanting to resort to hyperbole, our development team at Codence is thrilled with these glimpses at things to come.

Claris did not commit to a timeline for these new features, but we believe they represent a major evolution of the platform. In his opening comments, Brad acknowledged that FileMaker had enjoyed its “disruptive phase” in the technology world. The team at Claris is positioning these new, complementary elements to build upon its established foundation and drive further innovation into its low-code market.

Brad ended this unorthodox, online opening session with an ask: that the community participates in the company’s ongoing dialogues, early testing programs, partner meetings, and community forum discussions to better collaborate with Claris.

Naturally, the online session had a distinctly more modest feel compared to in-person Claris Engage developer conferences, but more than that – the team is clearly embracing agile practices in its more transparent, more organic communication with its community. In many ways they’re not trying to do it all themselves: we’re seeing more of the complexities they face, questions with which they wrestle, and even missteps along the way.

If the pandemic has shown the world just one thing, it’s that we’re not in this alone. I’m glad to see Claris broadening and opening the technologies of its platform and, in parallel, the plans and dialogues for its business.