The New FileMaker 18 is here!

That’s right, the latest version of your favorite Workplace Innovation Platform is out, FileMaker 18. Whether you already have a copy of this new release, or if you are simply curious, here is a list of some of the almost twenty new FileMaker 18 features. We’ve grouped each into categories – without further ado, let’s dive in!

The “Append to Existing PDF” option of the Save Records as PDF script step has been available in desktop versions since FileMaker 9 but now is also native on FileMaker Go.

This can be really helpful when creating complex multi-page reports incrementally; something which required complex scripting in previous FileMaker versions.

OAuth allows users to sign in to an app using common, pre-existing, credentials managed through Amazon or Google, simplifying the log-in process and avoiding the need to hard-code accounts in FileMaker security.

These new barcodes are commonly used in manufacturing, airline, and government agencies in particular. Additionally, some of these new barcodes can store greater amounts of data or be used for labeling very small parts (like 2-3 mm), allowing FileMaker to stay current with leading industry barcode standards.

The While function is a powerful iterative programming tool now included as a native FileMaker calculation option.

If you have ever created a Looping script in the Script Workspace, then you’re well on your way to understanding this new function. With it, you can more easily create recursive calculations that follow a familiar pattern. The default number of iterations is 50000, but you can adjust this as needed via the new SetRecursion function.

This new logging capability provides an easier method to track potential errors on a user by user basis, and automatically creates the error log file if it doesn’t already exist; functionality that required 3rd-party plugins before. In addition, the level of detail logged with each error makes it much easier for a developer to troubleshoot script issues.

As developers, this is likely the feature we’re most excited about. It will help immensely in tracking down unexpected behaviors, especially with solutions we may not have built.

Save A Copy As XML 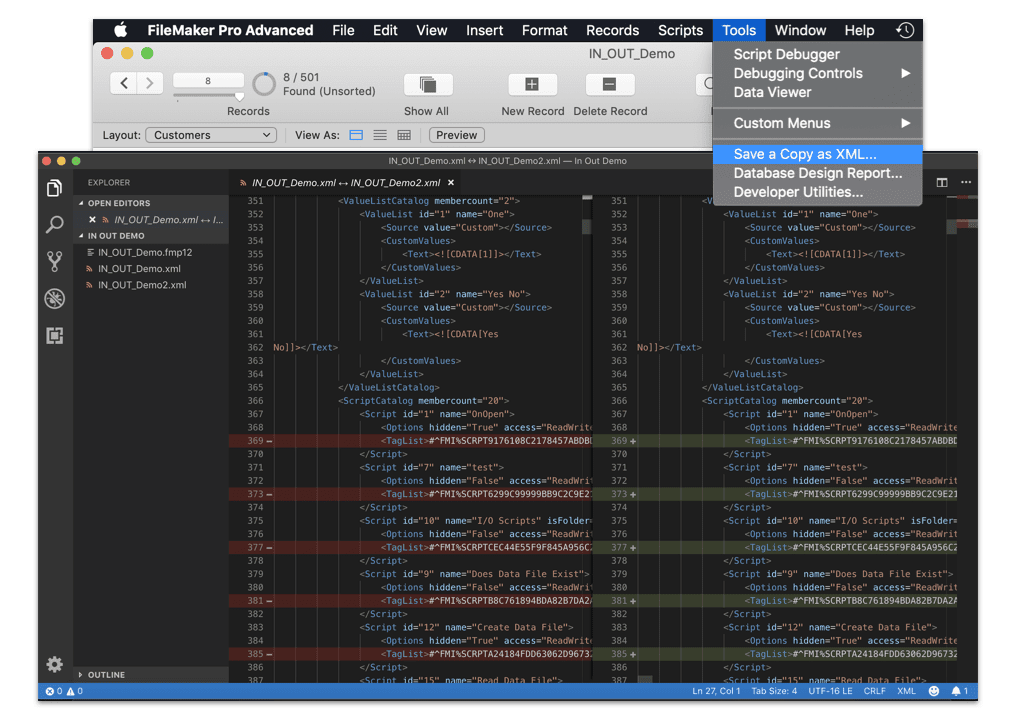 This new feature creates an exact XML copy of a FileMaker file for easier file comparison.

This is an important enhancement to a developer’s toolbox. Think of this XML copy as the DNA of your entire FileMaker solution in text form. With this new feature, Developers can now see any and all changes made between copies of the same FileMaker file and even use such XML copies for easier version control.

There are a number of third-party tools that make great use of this XML format. 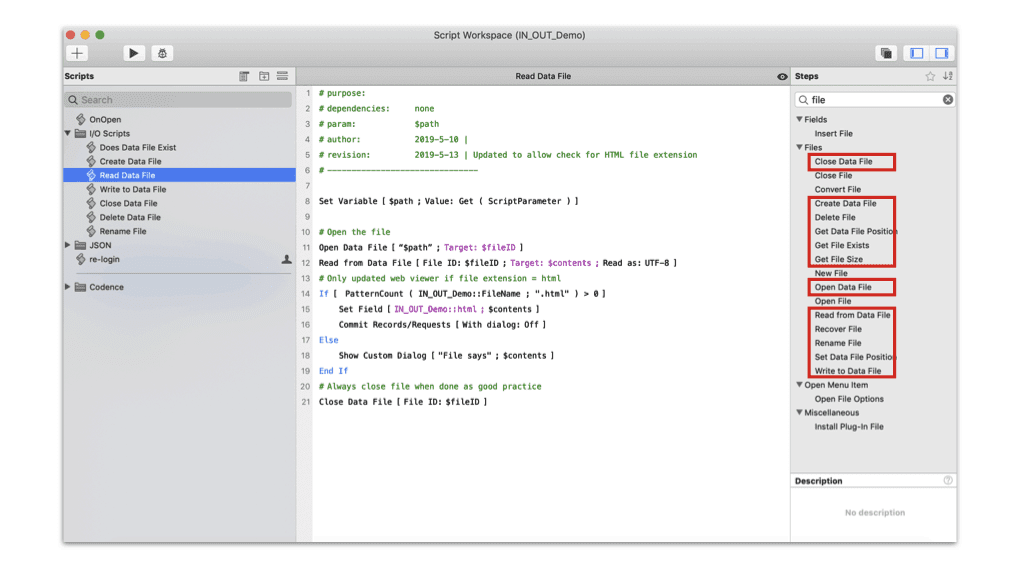 FileMaker 18 introduces twelve new script steps that allow FileMaker to more easily work with external files; regardless of device or operating system. Four of these new script steps (File Exists, Delete File, Rename File, and Get File Size) work with ANY kind of file, one script step (the Recover File) recovers a damaged FileMaker Pro file, whereas the remaining seven are specific to Data (a.k.a. text) files.

Most of these new capabilities (like deleting a file created from FileMaker as a temporary reference or validating that a file already exists in a particular location) formerly required 3rd party plugins, but now are now native. The new Data File steps in particular offer even more integration options between FileMaker and other common text-base data formats. 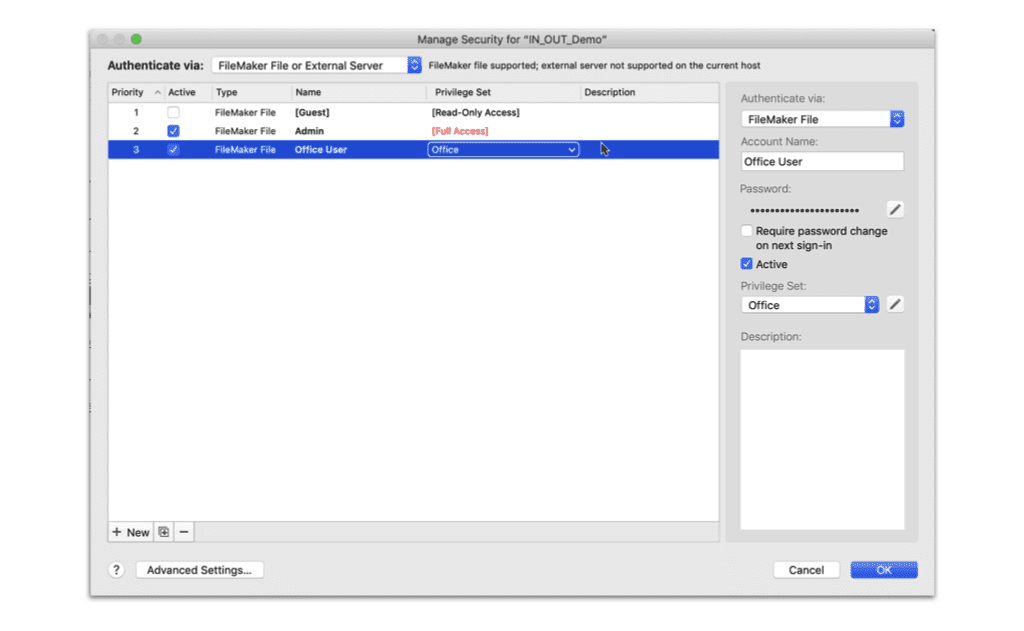 The FileMaker Manage Security dialog now has a new look that displays account details side-by-side rather than in a new window.

This updated interface is more modern and allows users a quicker way to switch between multiple accounts rather than having to constantly open and close auxiliary windows. 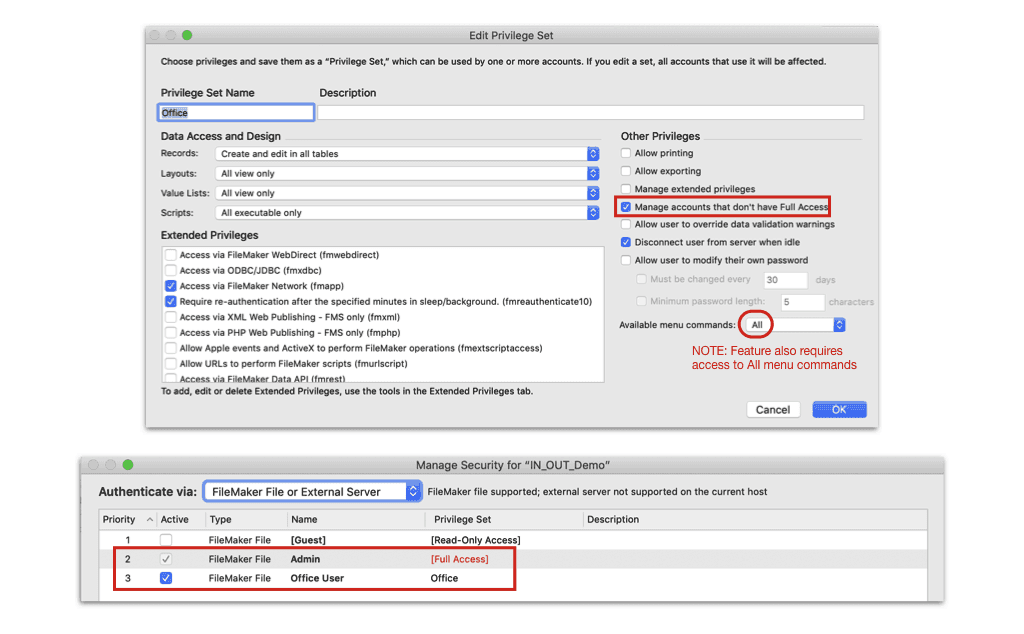 This allows for trusted FileMaker users to administer other staff accounts without the need for [Full Access] privileges. 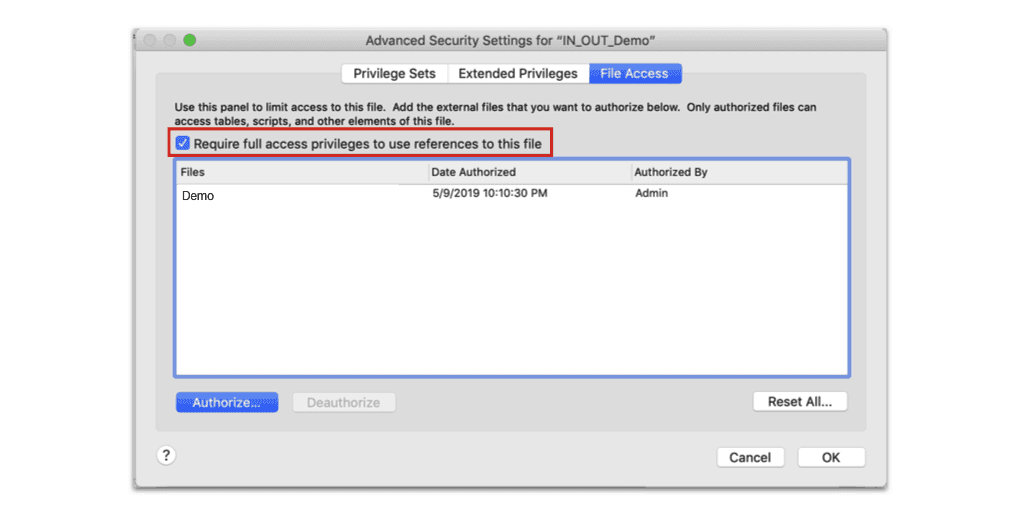 The Require full access privileges to use references to this file option that was introduced in FileMaker 11 is now turned on by default in FileMaker 18.

As security becomes a more and more critical component to building applications, having this option set by default helps to ensure that all new files created with FileMaker 18 are inherently more secure, better safe-guarding your data automatically. The option is still easy to disable if desired or necessary.

FileMaker plug-ins now require a digital signature by their developer, otherwise the plug-in may be blocked, and a FileMaker security warning will appear for Windows and Mac users.

This simple addition provides more transparency, and control for users as well as offering an extra layer of protection against outdated plugin-ins or potential malicious attacks. In addition to enhanced security, FileMaker 18 now provides more detail about any errors encountered when trying to load a plugin.

These changes provide a more intuitive interface so admins can better see the status of hosted files and server schedules; saving time and allowing for quick focus where needed.

This feature allows FileMaker Server administrators to leverage this API for managing one or more servers without requiring access directly from the FileMaker Admin Console. The Admin Console provides controls over a single server, but with this API, it is possible to create an application that allows control of multiple servers from one interface. 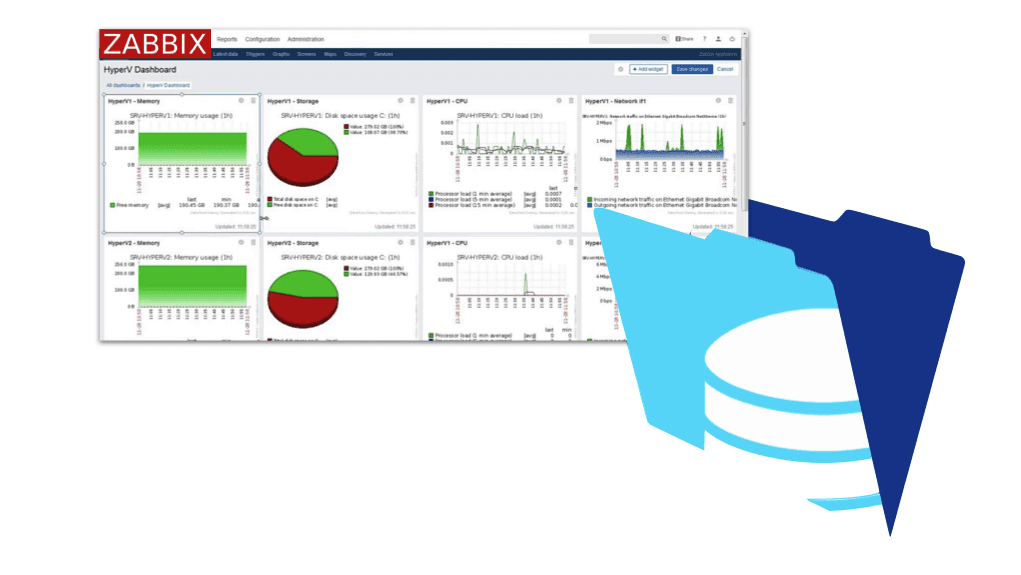 An excellent option for server administrators that wish to analyze, with great detail, how their FileMaker Server is performing. Zabbix can be very helpful when needing to troubleshoot critical issues through a real-time (and sharp looking) Server Monitoring Dashboard. 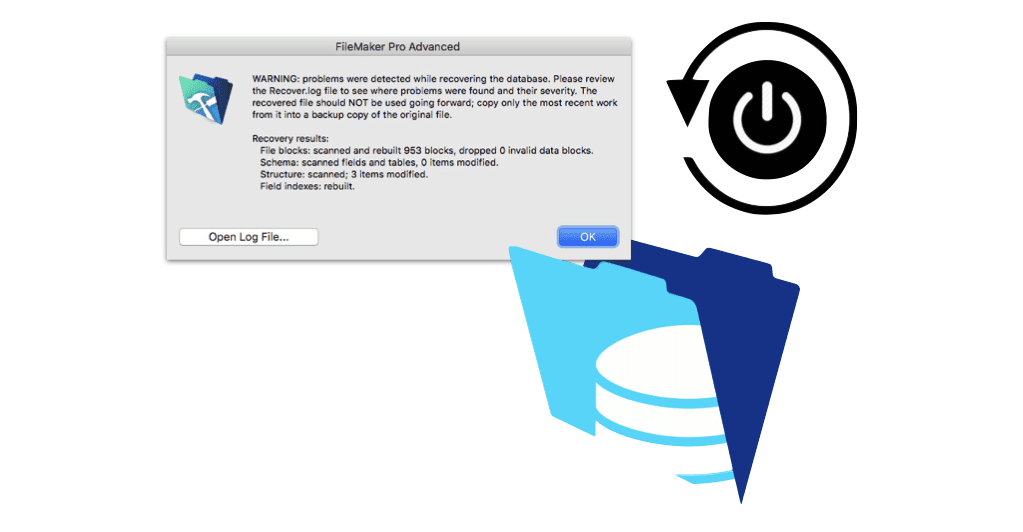 If issues are encountered with your database file after an unexpected server shutdown or crash, this new feature automates the recovery process; lowering the amount of potential downtime and ensuring that when the system is back online, everything will have been restored to a stable state.

In the unlikely event that a problem occurs, this feature will help ensure that users get back up and running as soon as possible. 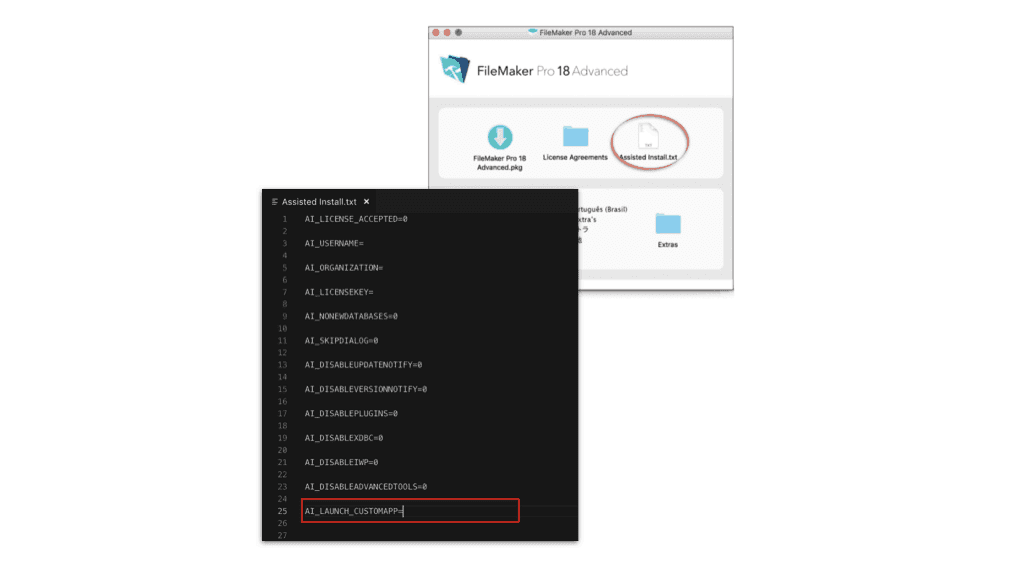 This feature allows a developer to specify a local (or hosted) FileMaker file to be automatically opened when opening FileMaker Pro on a computer or FileMaker Go on an iOS device.

This feature replaces “opener files” that developers have created for years. Now, this feature can be used to place the FileMaker application front and center, while keeping the FileMaker environment behind the scenes. 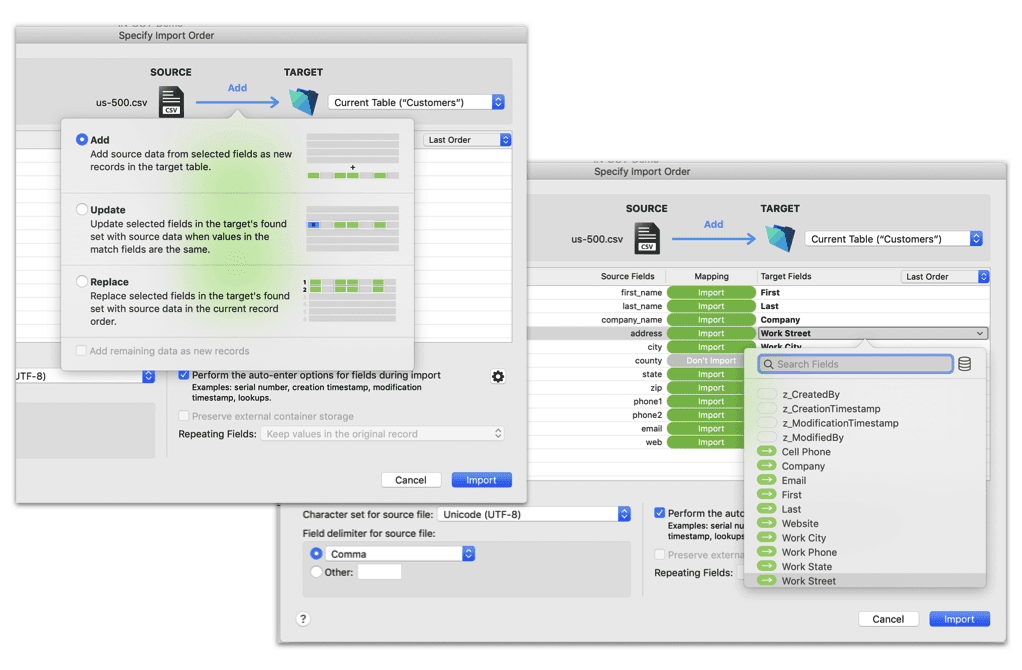 A very welcome change, the Import Dialog has been redesigned and now includes better tools and explanations for import options such as: Type-ahead field matching and more Granular control over each auto-import field

This is the first major update to the FileMaker Import Dialog since FileMaker 6 and offers a much more intuitive and user-friendly interface for both users and developers. This change might have you re-think what options to provide users when needing to allow a data import, and we’re hopeful that users will be able to make sense of the dialog right out of the box, as is (without the need for custom scripting.)

In the past, using the arrow keys to move one or more selected layout objects in FileMaker only moved them one, single, pixel, at, a, time… This new shortcut allows users to move FileMaker layout objects in increments of 10 pixels at a time, making layout object placement both easier and more consistent to other common software.

Okay, this one may seem trivial, but we’re pretty happy about it.

One of the most noteworthy changes to FileMaker began with FileMaker 17 and continues: a shift away from concurrent licensing to a much simplified per-user model.

With FileMaker 18, a license allows users access to the entire platform – desktop, advanced, web, mobile, and server – with one license key. While FileMaker’s platform-wide price is increasing, by simplifying and covering all deployment options, it offers significantly more value than past versions.

As you can see, the new FileMaker 18 has a good bit to offer to developers and users alike. Hopefully this summary of new features and improvements has gotten you as excited about this new release as we are.

FileMaker, Inc. continues to invest in key areas, most notably integration and their steady progress toward open XML-based file formats. While these features are less “front-and-center”, this evolution of the platform has dramatic implications: we already have the powerful Data Migration Tool, and we anticipate in the future having true version control. One can hope.

Thanks for reading and I hope you enjoyed this post. If you did, please share it with others or subscribe to our digital mailing list to stay up to date on our latest news. Additionally, if you still have questions about FileMaker 18, FileMaker in general, or simply want to say hello, please contact us here.

Jesse is a full-stack (MERN) software developer, with extensive experience in relational databases modeling and the building of custom app-based solutions. He has developed a wide and diverse skill set and a passion for bringing different technologies together through the use of custom integrations and the leveraging of various APIs.